A strong partnership between TOMRA and Lucara Diamond Corp

Lucara Diamond Corporation owns the Karowe diamond mine in Botswana, which has been in production since 2012. The mine is recognised as one the foremost producers of very large, high-quality Type IIA diamonds in excess of 10.8 carats. Historic recoveries include the 1,111 carat Lesedi La Rona – the second-largest gem quality diamond ever found – and the 813 carat Constellation diamond. Lucara’s success at the Karowe mine continues, most recently with rare gem quality blue and pink diamonds recovered in September 2019.

Initial work on the mine was carried out by previous owners in the 1970s with the technology available at the time, which had its limitations: “what we realised in looking at the diamonds that resulted from that work is that many of them were actually broken,” explains Eira Thomas, CEO of Lucara. “When production started, it became apparent that the diamond population was quite coarse, and that necessitated a re-think on how we could adjust or optimise flow sheet focused on diamond value preservation. That was our real focus and goal in starting the conversation with TOMRA, about how can we do this better, how can we actually get diamonds out of our mineralized ore in a more efficient way and in a way that actually maximizes the value of those diamonds and minimizes the damage of those goods.” 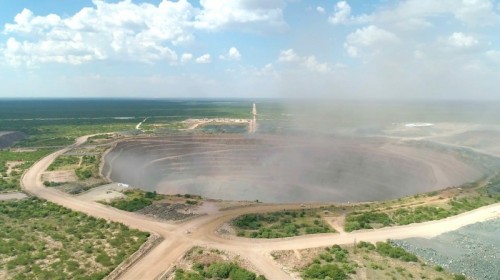 The AK6 Kimberlite found in the Karowe presents a difficult challenge, as John Armstrong, Vice President, Technical Services for Lucara explains: “it has a very high Dense Media Separation yield, in that up to 10 to 15% of the material that would go into the plant would report as a heavy-metal concentrate, making it a very difficult ore body to process in a traditional diamond processing scenario. We undertook a series of testing campaigns and investigations to explore alternative technologies. We elected to go with TOMRA as our partner in moving forward in getting this technology to the mine into part of the circuit that hadn’t been envisioned previously.”

TOMRA’s solution delivered very quickly, exceeding all expectations: “When we put in the large diamond recovery circuit in 2015, it was within 2 weeks of making this investment, which was somewhere around 30 to 35 Million dollars, that we recovered those two exceptionally large diamonds, so in this case it was under 2 weeks we’d already had two times our return on that investment,” says Eira Thomas.

The Lucara project clearly shows that TOMRA stands out not only for its industry-leading technology but, very importantly, for its extensive know-how and approach to working with customers, which it views as a true business partnership.

Eira Thomas explains the reasons for their choice of working with TOMRA: “We felt, certainly, that the technology that TOMRA offered was the best. But, more importantly, I think it was really around the approach, the attitude of collaboration and willingness to actually work with Lucara as we undertook to solve this problem, and that to us was a very appealing element because we weren’t entirely certain what the solution was going to be, we just felt that by working with a team of experts that understood the problem and had technology that could help us, we could together come up with a solution that made sense. And I think that was the big opportunity for us as we sought in working with TOMRA.”

John Armstrong agrees: “As part of the process that made working with TOMRA unique and special was their willingness to view the relationship between Lucara and TOMRA as a partnership, and we were both investing in this, and we were both going to learn a lot from it, and we relied on each other to ensure that we were going to be successful.”

TOMRA: a game changer for the future of diamond mining

“I think the Lesedi and The Constellation recoveries really did open up a lot of eyes, and I think it opened a lot of minds to the idea that technology can and will make a big difference to not only existing diamond mining operations, but future mining opportunities and it’s a great testament to the efforts that we’ve made in collaboration with TOMRA to really get out and tell the story,” comments Eira Thomas.

John Armstrong agrees: ‘With the early record-breaking diamond recoveries, we were able to demonstrate to the world that we can recover large high-quality gem stones using the TOMRA technology and using the systems and processes that we have in place at the Karowe mine. And we look forward to challenging the convention further with other innovations that we will employ with TOMRA going forward.”

A strong partnership between TOMRA and Lucara Diamond Corp