Bottle bill states and how they work

Currently, 10 states throughout the U.S. have bottle bills (container deposit return laws) in place. Learn more about how these bottle bill states work, the scope of containers included, and the results they have achieved.

Bottle bills, also known as container deposit return laws, are the practice of adding a small deposit on top of the price of a beverage. This is repaid to the consumer when the empty can or bottle is returned to a retailer or redemption center for recycling. Think of it as buying the beverage, and borrowing the packaging. By giving people an incentive to return their recyclables, this method has been proven to reduce litter and increase the recycling rates of containers.

Currently, 10 states throughout the U.S. have a bottle bill: California, Connecticut, Hawaii, Iowa, Maine, Massachusetts, Michigan, New York, Oregon, and Vermont. In 1953, Vermont became the first state to pass a bottle bill, which prohibited the sale of beer in non-refillable bottles. While this law differed from bottle bills as we know them today, it raised awareness of litter, conservation and waste management issues. In 1971, Oregon became the first state to pass a bill that required all beer and soft drink containers to have refundable deposits as a litter-control measure.

Check out the below infographic to learn more about how the bottle bill works in each state. 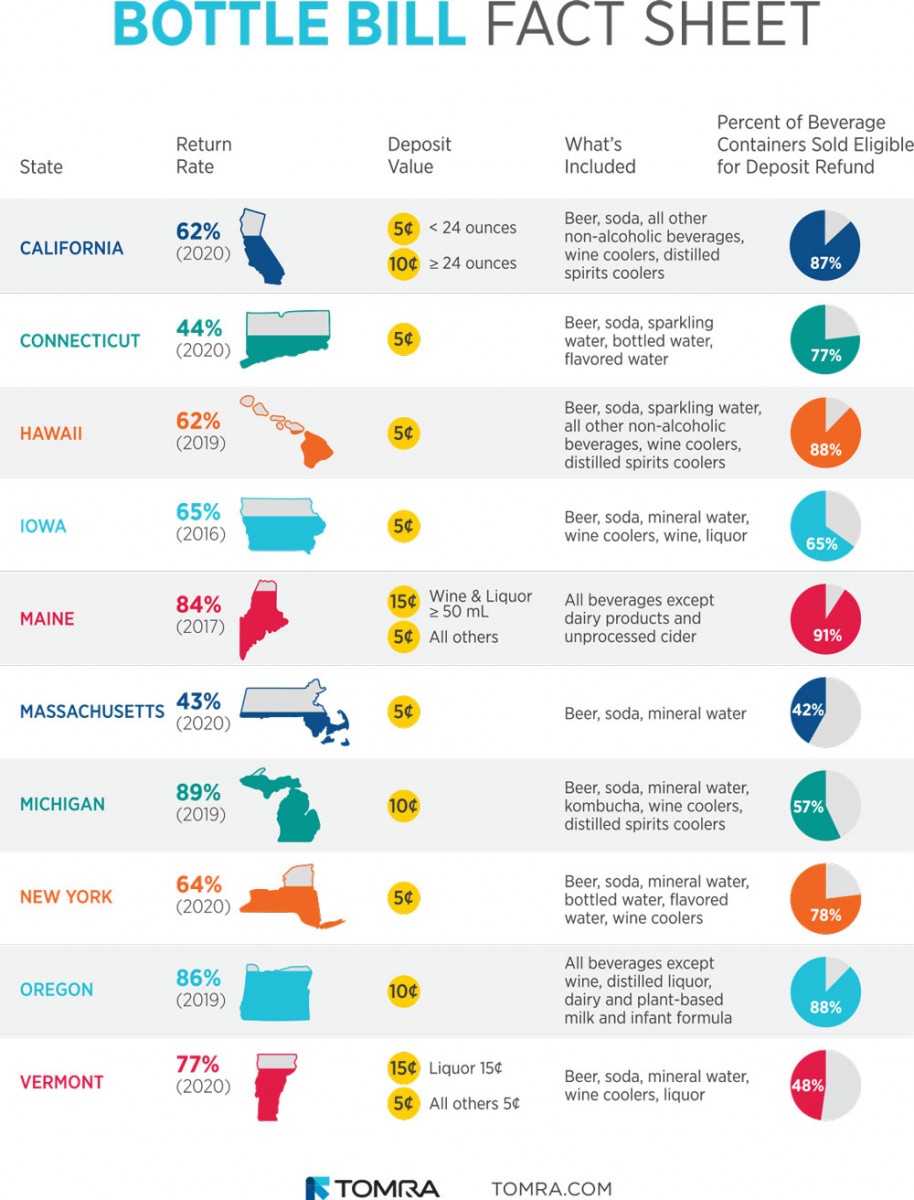 Michigan and Oregon have the highest return rates of U.S. bottle bill states, with more than 85% of eligible beverage containers returned by consumers for recycling. This is largely attributed to the higher 10-cent deposit, which offers a compelling incentive to return used beverage containers. On the other end of the spectrum, Connecticut achieves a 44% redemption rate. Experts attribute this to the low five-cent deposit value relative to local consumer’s purchasing power, and an underfunded redemption system. In recognition of these issues, Connecticut recently voted to overhaul its system, including updating the deposit value to 10 cents.

Bottle bill states and how they work