By land and by sea, why the fight against plastic pollution is just as important on our own home turf

To mark World Environment Day, TOMRA looks at the issues surrounding land-based plastic waste and how it is damaging both our wildlife and the environment. 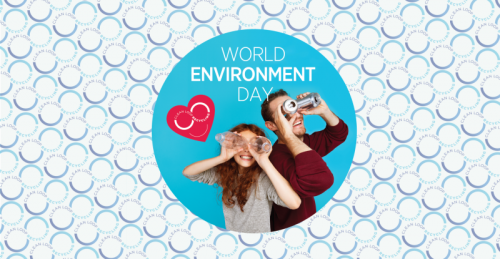 Reports suggest that roughly 80% of all plastic waste found in our oceans comes from land, and the damage this waste is causing is a huge area of concern for our planet.

There has rightly been a huge focus on marine litter and the detrimental effects it has on sea life; however, less noise is made around the impact that plastic waste is having on our land-based environment. Litter on our streets and in nature, as well as growing landfills may not be as well-documented as the huge environmental concern for our oceans, yet the impact it is having on our planet is just as serious. In fact, terrestrial microplastic pollution is much higher than marine microplastic pollution - an estimate of four to 23 times more, depending on the environment.

To mark World Environment Day (June 5, 2019), TOMRA is hoping to raise awareness around the impact plastic pollution is having on our wildlife, and the steps that can be taken to combat the plastic crisis.

We are facing a global plastic epidemic. It’s predicted that a million plastic bottles are sold a minute, yet 91% aren’t being recycled. However, with global legislation tightening the reign, countries are being forced to face up to the dilemma of how best to handle this plastic tidal wave.

China's National Sword policy, enforced from February 2018, has already put a strain on how countries deal with their waste. The EU alone sent approximately 12-13 million tons of rubbish to China annually and are now having to rethink their waste management strategy. Malaysia has also recently announced it would be returning shipments of plastic waste that were of a low-quality and non-recyclable, to eliminate the risk of the country becoming a “dumping” ground for the rest of the world. Thailand has also introduced legislation to ban the import of plastic waste.

Although these regulations are encouraging some countries to manage their own waste more successfully, minimizing refuse volume by implementing better recycling methods, it has also meant that more waste than ever is ending up in landfill or as litter, as costs rise to haul it away.

Research suggests that 8.3 billion metric tons of plastic have been produced since it was invented, and a shocking 6.3 billion metric tons is now plastic waste. Of this waste, 79% has been buried in landfills or ended up in nature - not only extremely hazardous to our environment, but also enormously wasteful of a material that could be used again and again.

If we continue at the current rate of production without better recycling infrastructure in place, there will be 12 billion metric tons of plastic waste in landfills by 2050. To keep our planet healthy, something has to change.

As the level of plastic waste being landfilled rises, so does the potential risk to our environment.

It is believed to take about 1000 years for plastic to decompose; as it breaks down, it releases toxic substances into the soil and water sources. Researchers from the Leibniz-Institute of Freshwater Ecology and Inland Fisheries (IGB) have warned that when these pollutants enter soils, sediments and freshwaters they will have a long-term impact on ecosystems across the planet.

The study estimates that a third of all plastic waste eventually ends up in soils and as freshwater microplastics, caused by the material disintegrating into particles less than five millimeters in size.

Nano-plastics are even smaller than microplastics and frighteningly they can traverse or change cellular barriers within animals, impacting membranes such as the blood-brain barrier and causing biochemical reactions – all of which alter the organism and our ecosystem.

Alongside damaging our environment from the ground up, plastic pollution has been found to have a profound effect on its natural inhabitants: our land-based wildlife.

Recent studies suggest that plastic waste is impacting the growth and reproductive success rates of the animals in our natural world, due to chemicals released from decomposing plastic creating a disruption in hormones. In a report by the Zoological Society of London, it’s believed that wildlife that has been subjected to a mix of endocrine-disrupting chemicals (EDCs) are failing to reproduce, yet the impact of this hasn’t been fully discovered.

Furthermore, EDCs, thought to be leaked into the environment through the breakdown of plastics in landfills, can also be passed from mother to newborn through their milk supply, as it accumulates within the fat glands where the milk is produced.

Plastic waste is also causing issues for birds, who are using strands of plastic mistaken for leaves and branches to build their nests, as an alternative to natural materials.

More concerningly, birds are mistaking plastic waste for food and feeding it to their chicks, to detrimental effect. Inside the stomachs of many deceased seabirds in the UK, scientists found scraps, plastic bottles, bags and packaging - a situation described as ‘heartbreaking’ by Sir David Attenborough in his most recent Blue Planet series.

Sensor-based solutions to keep our land and oceans clean

Unfortunately there are limitless examples to how plastic pollution is affecting life on land as well as at sea, and World Environment Day only highlights the work that needs to be done in the battle against plastic waste. There is no one solution to the problem, but for a better future for our planet, we need to innovate and implement new solutions to help us manage our plastic waste more efficiently.

Globally, TOMRA Collection captures over 40 billion containers annually through our 82,000 reverse vending machines. Primarily through deposit return schemes, TOMRA Collection collects bottles and cans for a system called Clean Loop Recycling. Beverage containers recycled through reverse vending machines are collected and sorted without contamination from other types of waste, ensuring that they can be recycled into new bottles and cans again and again.

Every time an empty container is not recycled, it ends up in a landfill, incinerator or somewhere in nature. Not only does it harm our planet, but it creates the need to make a new container from raw materials – taking more resources from the planet than necessary.

By investing in better recycling technology rather than outsourcing waste, the recycling industry will see higher purity levels, meaning less material in landfills and less environmental pollution. The more material kept in a closed loop the less that ends up where it doesn’t belong, in our oceans, streets and landfills.

With our planet facing a waste crisis, we need to live more sustainability and recycle more efficiently. TOMRA’s mission is to lead the way in the resource revolution and change consumer and manufacturer behavior. Deposit return schemes and Clean Loop Recycling provide one part of the solution to changing attitudes around empty drink containers and improving recycling rates.

By land and by sea, why the fight against plastic pollution is just as important on our own home turf