TOMRA advances to the final of prestigious European Business Awards

TOMRA has been named as a Ruban d’Honneur recipient and one of ten finalists now being considered for the 2014-15 European Business Awards in the category “The Business of the Year with Turnover of €150m or higher.” 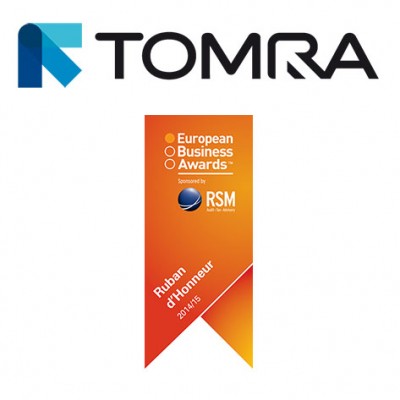 In the first stage of the competition TOMRA was named as one of ten National Champions from Norway. In the second stage just completed 110 Ruban d’Honneur recipients were chosen from 709 National Champions by a panel of judges made up of European business and political leaders, academics and entrepreneurs. TOMRA will now go on to compete in the third and final round of judging resulting in 11 overall category winners to be announced later this year.

“We are very proud to have been recognized as one of Europe’s most dynamic companies by the esteemed and thorough European Business Awards judging process. It is indeed an honor to have attained the Ruban d’Honneur distinction, and we look forward now to participating in the final round of the European Business Awards review,” said Stefan Ranstrand, TOMRA President and CEO.

The Business of the Year Award

TOMRA will now be competing against nine other companies (with turnover of €150m or higher) to win the overall 2014-15 European Business Awards’ Business of the Year category.  This award will go to the outstanding company that best demonstrates exceptional financial returns, strong growth and innovation strategies, and market leadership in its sector. Judges will look for evidence of inventiveness, ethical credentials, good stakeholder relationships and long-term planning balanced by the flexibility to deliver consistent results in dynamic market conditions.

Running alongside the competition’s internal judging process is a public vote which will decide the “Public Champions” of the competition. In this competition the public has the opportunity to view video submissions provided by the participating companies and vote for their favorite company. To view the videos submitted by TOMRA and other companies, visit the European Business Awards website. The National winners of the public vote will be announced on 3rd March, 2015, and one overall European Public Champion will be selected in June.

About the European Business Awards

TOMRA advances to the final of prestigious European Business Awards