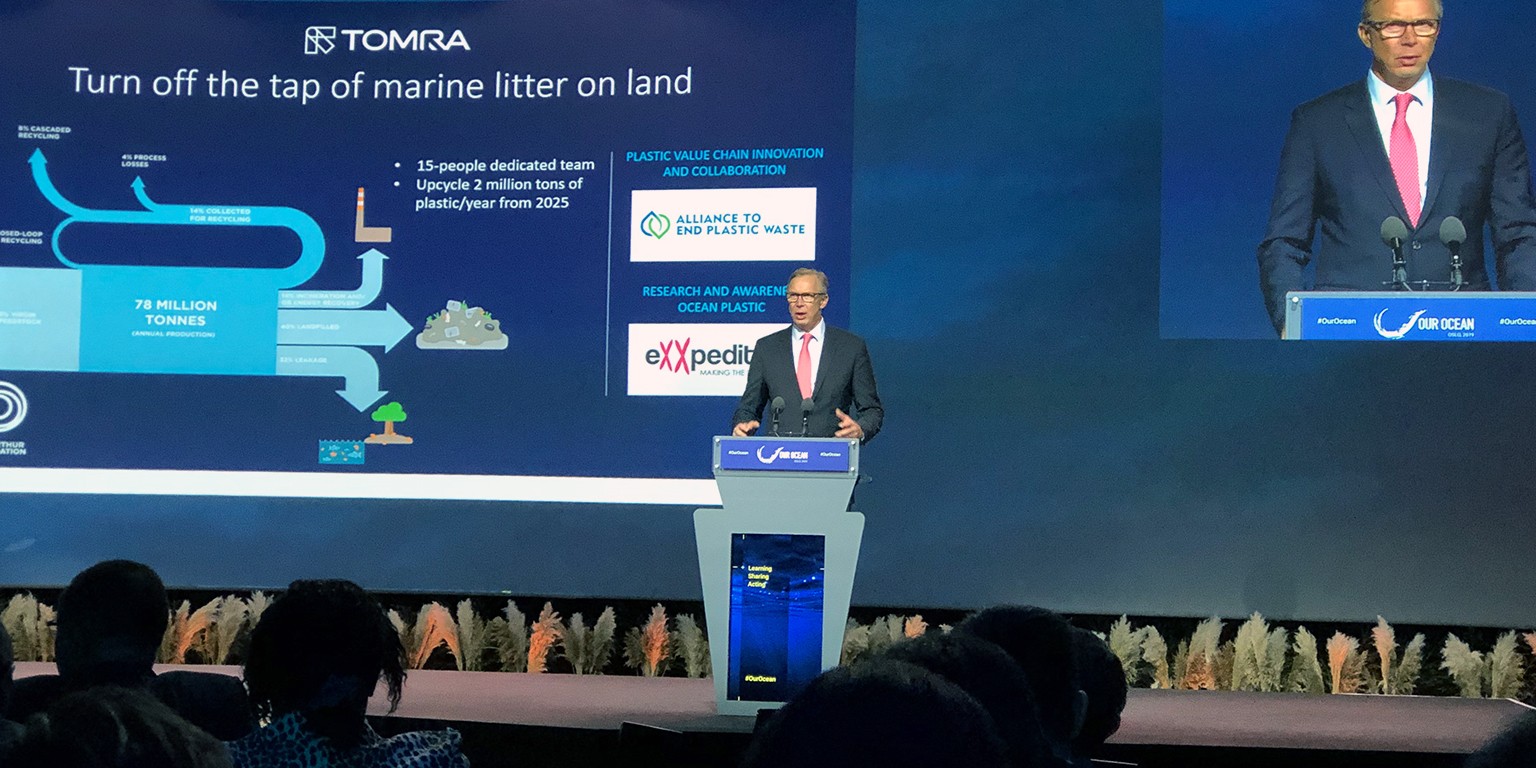 TOMRA announces commitment at Our Ocean

TOMRA president and CEO Stefan Ranstrand announces a commitment to enable 40 per cent of plastic packaging produced globally each year to be collected for recycling by 2030, at Our Ocean conference in Oslo.

World-leading sustainable technology company TOMRA has announced its commitment to enable 40 per cent of plastic packaging produced globally each year to be collected for recycling by 2030, at Our Ocean conference held in Oslo.

Currently, only 14 per cent of plastic packaging is captured for recycling. And only two per cent of this is recycled in a ‘closed loop’, meaning it can be reused again for the same purpose without being downgraded to lower quality plastic.

Norway-headquartered TOMRA, which is the world leader in reverse vending machines and sensor-based sorting systems for the recycling, food and mining industries, made the announcement at Our Ocean on October 23-24. The event brings together government, business, civil society and research institutions to identify solutions for healthy oceans.

Announcing the targets, TOMRA president and CEO, Stefan Ranstrand, said: “A circular economy for plastic is achievable, and there is every reason to be optimistic about the future, but it requires investment from industry, government and consumers. TOMRA has been enabling this change through our technology and expertise for more than 45 years – we challenge others to join us and act now.”

Stefan added: “We believe now is the time for bold action on plastic pollution in our oceans. TOMRA is the undisputed world-leader in the collection and recycling of plastic packaging, particularly bottles, and we are proud to be leading the industry by launching these ambitious targets.

“To solve the crisis in our oceans, we must focus on how plastic is produced and handled on land. There is clear evidence that recycling infrastructure such as container deposit schemes drive huge improvements in recycling rates, consumer behaviour and reducing pollution.”

High-profile partnerships that TOMRA has recently entered into include the new global Alliance to End Plastic Waste, which has pledged NOK 13.67 billion towards solutions to eliminate plastic waste.

The company is also sponsoring and advising an all-female, round-the-world scientific sailing voyage called eXXpedition, which set sail in October with the aim of raising awareness about marine litter.

TOMRA was founded on an innovation in 1972 that began with design, manufacturing and sale of reverse vending machines (RVMs) for automated collection of used beverage containers. Today TOMRA provides technology-led solutions that enable the circular economy, and advanced sorting systems that optimize scarce resource recovery and minimize waste in the food, recycling, mining and other industries.

TOMRA has ~100,000 installations in over 80 markets worldwide and had total revenues of ~8.6 billion NOK (€880 million) in 2018. The Group employs ~4,000 globally and is publicly listed on the Oslo Stock Exchange (OSE: TOM). For further information about TOMRA, please see www.tomra.com