Mülheim-Kärlich, 28.12.2021 – From January 2022, Germany’s deposit return system has expanded to include alcoholic beverages and juices sold in one-way plastic packaging and cans, as well as milk-based mixed drinks in cans. This will result in greater transparency for consumers, since up until recently, the system (set up in 2003) has included a special provision which exempts these beverages from the mandatory deposit. The expansion is expected to result in the collection of approximately 85,000 tonnes of additional plastic and aluminum, with the total volume of packaging returned to reverse vending machines increasing to some 500,000 tonnes.

According to Deutsche Pfandsystem GmbH (DPG), the system’s operator, the overall return rate for disposable packaging in Germany is 98%. This not only means that there is much less refuse on roads and in forests and, more importantly, has made it possible to create a circular economy. Over 40% of the one-way bottles that are returned are now made from recyclate. This processed plastic can undergo the production process many times, replacing crude oil as a raw material. In its Single-Use Plastics Directive (SUPD), the European Union has specified targets of 25% recycled plastic in PET bottles by 2025, with the objective of promoting closed material cycles to the greatest extent possible. Latvia, Slovakia, Romania, Turkey, Greece, Malta, Portugal, Ireland, and Scotland have responded to this legislation by passing regulations to create deposit systems for plastic packaging either next year or the year after (see map).

“The introduction of the mandatory deposit system in Germany has been a huge success and is now a global model,” said Volker Rehrmann, TOMRA Executive Vice President and head of the Recycling/Mining & Circular Economy division, headquartered in Mülheim-Kärlich, Germany. “Its expansion will result in new types of materials entering the system, which we will be able to sort and return to the circular economy via the relevant recycling processes, just as successfully as we do with the PET used to manufacture bottles for mineral water.”

As an innovation leader, TOMRA achieves a return rate of almost 100% with its cutting-edge reverse vending machines. The result? An exemplary environmental footprint and significantly more raw materials entering the recycling loop. The higher the proportion of recycled materials, the less crude oil is required to produce new products, and the lower CO2 emissions are. 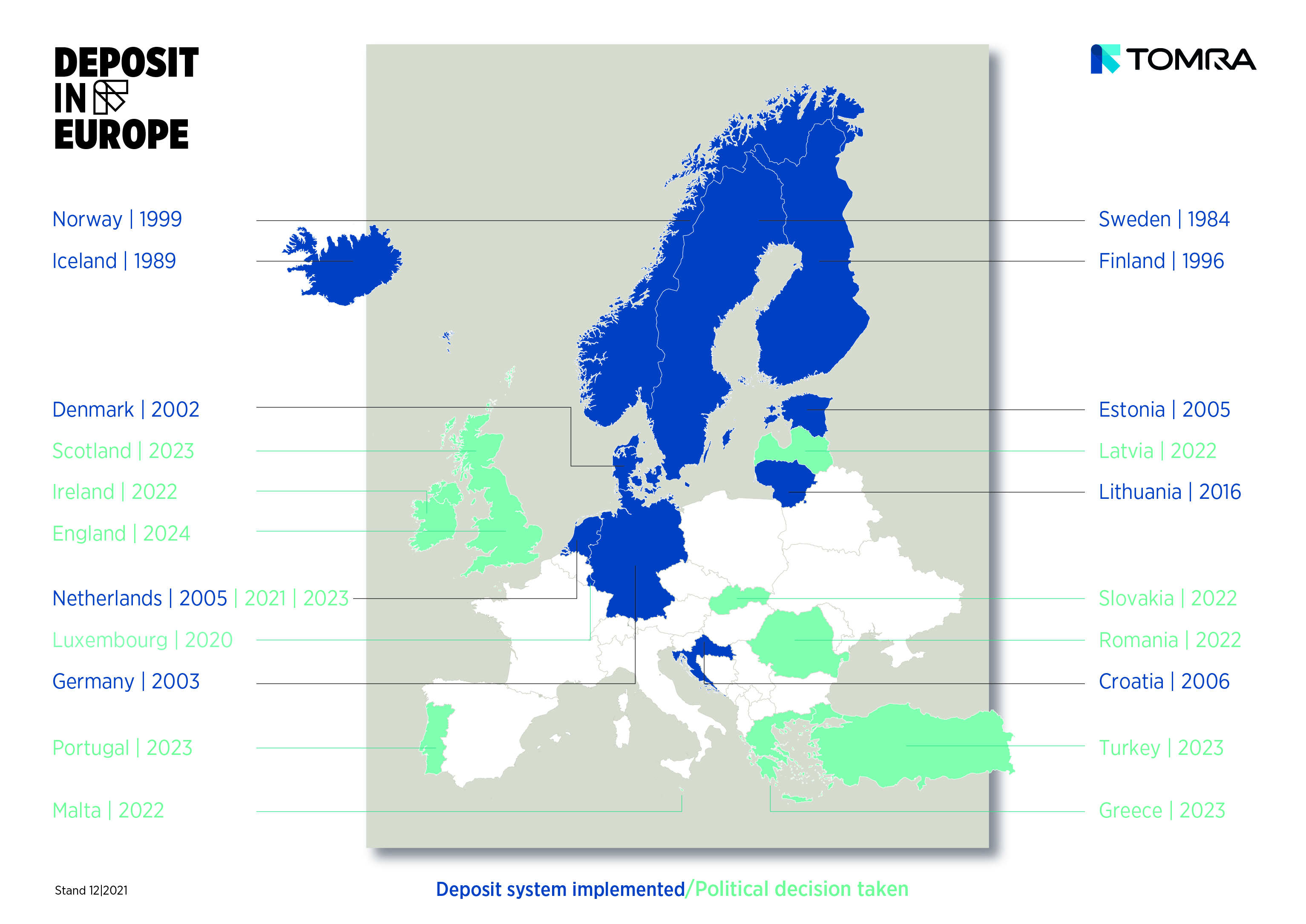 TOMRA began developing, manufacturing and selling machines to take back empty drinks packaging in 1972. Today it is the international impact leader of collection and sorting systems for the recovery and reduction of waste in the food, recycling and mining industries. The Circular Economy division, set up in 2020, is the vehicle for realizing TOMRA’s commitment to setting up and operating circular economy systems around the globe.

TOMRA has installed over 100 000 systems in over 80 markets worldwide and in 2020 achieved turnover of some 9.9 billion NOK. The group has around 4 500 employees and is traded on the Oslo stock exchange (OSE: TOM). For more information visit www.tomra.com.