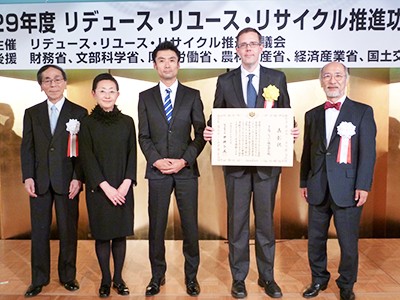 In selecting TOMRA Japan for the prize, the 3R Promotion Council pointed to the new way in which both consumers and retailers engage in recycling using TOMRA reverse vending machines. It noted the use of advanced sensor technology in the machines to ensure high quality PET materials in the recycling loop, and the built-in compaction units that help increase storage capacity and reduce the frequency of material transportation, thus contributing to lower CO2 emissions.

The prize ceremony took place in Tokyo on October 31st where Sonny Söderberg, President of TOMRA Japan, received the prize from Mr. Masaki Ogushi, Parliamentary Vice-Minister of Economy, Trade and Industry. Commenting on the award, Mr. Söderberg stated, “We take this as evidence that reverse vending has become a real benefit in Japan and that more and more consumers are starting to view used drink containers as a resource, rather than waste.”

He further noted, “Involving consumers as active participants in the recycling loop is the key to increasing collection rates and expanding the bottle to bottle recycling schemes now taking root in Japan.”

To date, TOMRA Japan has placed around 1,200 reverse vending systems in leading supermarket chains in Japan. Last year the machines were used collected 300 million PET bottles or 9,300 tons of material, a volume nearing 2% of the total consumption of PET bottles in Japan.

TOMRA was selected for this Minister of Economy, Trade and Industry 3R Prize among 132 nominated companies, with the jury being appointed by the Japan 3R Promotion Council. This Council is made up of 70 leading environment organizations and backed by seven government Ministries. The prize was initiated in 1992.

Founded in 1972, TOMRA is the preferred partner for reverse vending solutions for collecting, reusing and recycling cans and bottles. The TOMRA system has the machines, digital solutions and service to make recycling easy for the industry, system owners, retailers and consumers. With over 75,000 installations across more than 60 markets, TOMRA’s reverse vending machines capture 35 billion used beverage containers every year – reducing reliance on raw materials and ensuring fewer containers end up in landfills, oceans and streets. Visit our Reverse Vending pages on www.tomra.com, and follow us on Facebook, Twitter and LinkedIn.

TOMRA Collection Solutions is part of the TOMRA Group, which creates sensor-based solutions for optimal resource productivity, and has a vision to lead the Resource Revolution. The Group employs approximately 3,300 people globally and is publicly listed on the Oslo Stock Exchange (OSE: TOM).