TOMRA has been named as one of the national winners for Norway at the first phase of Europe’s largest business competition, the prestigious European Business Awards. 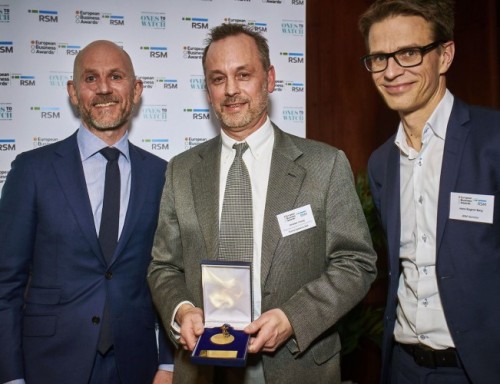 TOMRA won the Business of the Year Award for businesses with a turnover of €150m or higher. It was one of eight winners to receive the accolade at an exclusive event held at Café Opera in Stockholm, competing against 89 entries from Norway’s leading businesses.

A panel of independent judges including senior business leaders, politicians and academics selected TOMRA as “one to watch,” applauding its innovative solutions for optimal resource productivity within recycling, food production, mining and other industries. The Asker-based company has 95,700 advanced sensor-based sorting systems installed across 80 markets worldwide, employs around 3,420 people and had total revenues of 7.4bn NOK in 2017.

As a national winner, TOMRA will go on to represent Norway in the final stage of the European Business Awards at the gala final in Warsaw, Poland on May 23, 2018. The company has a strong track record with the awards, being crowned European Business of the Year in 2015 and national champion in 2014.

Commenting on the award win, president and CEO of TOMRA, Stefan Ranstrand, said: “TOMRA is proud of its Norwegian heritage, dating back to our founders’ invention of the first reverse vending technology in 1972, and we continue to succeed on a global stage. Being awarded a European Business Award is testament to the dedication and hard work of all our colleagues."

“I believe the European business community is leading the way in optimizing the world’s use of resources, from working towards a circular plastics economy to ensuring more efficient food production. TOMRA shares these goals, and we look forward to continuing to play a vital role in the resource revolution with our innovative technologies,” said Ranstrand.

The European Business Awards (EBA) is an independent awards program designed to recognize and promote excellence, best practice and innovation in the European business community. Now in its 11th year, its primary purpose is to support the development of a stronger and more successful business community throughout Europe. Last year it engaged with over 33,000 businesses from 34 countries.

TOMRA's XRT sorter at Renison Tin mine in Tasmania
TOMRA is ready for the expansion of the deposit return system in Germany from January 2022
New deposit return system for beverage containers launches in Slovakia
8 ways to be more sustainable in the new year
TOMRA welcomes new launch date for Scotland's deposit return scheme
COP26: To solve the climate crisis, we must transition to a circular economy