TOMRA R1 behind the scenes: Developing a revolutionary recycling experience

As TOMRA R1 celebrates the one-year anniversary of its launch, we take a look back at the development process behind transforming the recycling experience, and what lays ahead 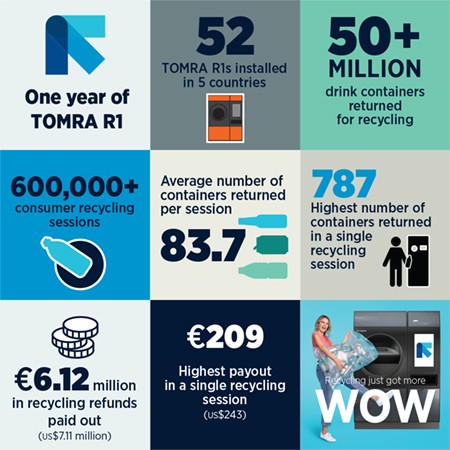 On 5 November 2019, TOMRA Collection unleashed a recycling innovation that was years in the making: the TOMRA R1 reverse vending machine (RVM). The “multi-feed” RVM enables recyclers to pour over 100 empty beverage containers into the machine in one go – rather than inserting them one by one. This means that recyclers can empty an entire bag of drink containers into the RVM in seconds, making it more convenient and motivating to do their part for the planet.

Tailored to larger stores and redemption facilities collecting high volumes of containers, TOMRA R1 seeks to offer a more efficient and convenient recycling experience. This can attract footfall and repeat visitors to recycling locations, and increase the volume of containers returned. ​When returning over 100 beverage containers, recycling at TOMRA R1 is up to five times faster than using a single-feed solution.

Today, over 50 TOMRA R1 reverse vending machines are installed in five countries. To date the machines have had more than 600,000 recycling sessions, capturing over 50 million bottles and cans - with a huge 787 being the highest recorded number of containers returned in one session.

As TOMRA R1 celebrates the one-year anniversary of its launch, we spoke to the two TOMRA Collection product managers who brought TOMRA R1 from the mind to the market.

“We began testing early versions of TOMRA R1 in the field with retailers and recyclers in Norway and Sweden from 2016, but the idea of a multi-feed machine had been part of TOMRA’s strategy for some time before that,” explains Katrin Bjoland, former TOMRA R1 Product Manager, and now Business Development Manager at TOMRA Collection. In 2011 the team conducted an internal pre-study of what kind of solution this could be, and this work led to the launch of TOMRA’s “Expert” line, a bulk solution for bottle depots and industrial facilities. “This was an important step in the development process toward the TOMRA R1 we have today, because we built a lot on the experience and knowledge that we gained from bringing the Expert line to market.”

The development process saw learning points, challenges and wins, and was undertaken with the great dedication and hard work of the team. The development was made possible by a large, interdisciplinary team – spanning industrial design, mechanics, software, electronics, and marketing. After several early versions of the multi-feed machine were tested in house, the first iterations for a real-world retail setting were installed at the end of 2016 in Sweden and Norway. The goal was to get proof of concept for the technology, see the response from consumers, and get feedback from retailers on whether this could be an interesting offering in their stores. The response was positive on all fronts, with the machine proving a huge hit with consumers. Development moved to revising the design, and planning for maintenance and service.

New prototypes moved into the stores, and the number of test locations expanded – including to the US. “The stores that have been with us through those transitions have really seen the improved design, so they were really happy with how it turned out. We valued their feedback and took that into consideration for the design,” explained Katrin. The third pilot saw the addition of an operator screen located inside the backroom, so store personnel have all the information they need at their fingertips – becoming TOMRA’s first RVM with this feature.

“The machine is totally fantastic! Customers love it, and we definitely have customers coming to the store because of it,” explained Fredrik Hallenstvedt, Store Manager at Meny Borreveien in Norway, one of the testing locations for TOMRA R1. “Since installing the machine we have experienced over 200% growth in the volume of containers compared to the year before.” 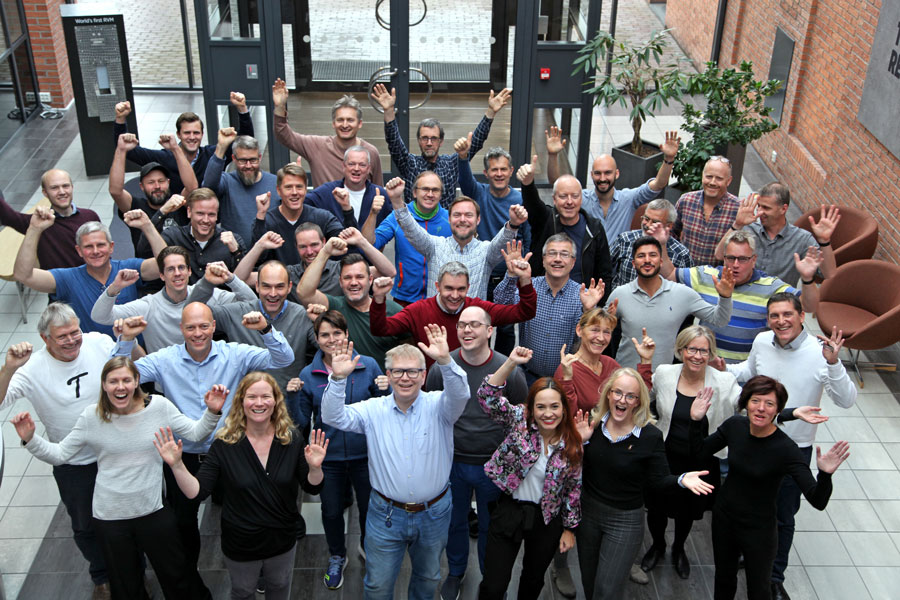 As well as taking on board retailer feedback, Katrin was pleased to see the positive response from end users. “At one store, recyclers were lining up almost out the door to use the machine, even though another single-feed RVM beside it was open and available. The store manager tried to guide people to use it, but they just said, ‘No thank you, we came to use this one.’” The test phase saw recyclers arrive with trailers full of containers, drive 20 kilometers past other stores in order to use TOMRA R1, and a demonstration video uploaded to social media by one of the stores reached 425,000 views. “The positive response from recyclers and retailers alike were the result of the persistence and amazing team efforts of our colleagues across the organization.” (See the team, left.)

After the extensive testing, TOMRA R1 hit the market in November 2019 for Norway, Sweden, and redemption centers in the US. The brand new multi-feed RVM launched with the tagline “Recycling just got more WOW!”, reflecting the response many consumers gave during the test phase when trying out TOMRA R1 for the first time. The R in the TOMRA R1 name was added to highlight the Revolution in transforming the recycling experience. After the years of development, Katrin missed the launch of TOMRA R1 by just a few weeks, when she began her maternity leave in October. “Now I had another launch of my own to plan for.”

The TOMRA R1 launch attracted huge interest, with the news published both in the launch markets and internationally in media covering retail, packaging, waste management and technology media, as well as regional media local to the stores. The Norwegian national broadcaster NRK even visited the research and development facility at TOMRA headquarters to film TOMRA R1 in action.

download
The value of a revolutionary recycling experience​ - TOMRA Talk

The new multi-feed machine made its trade show debut at EuroShop, the world’s largest retail trade fair, in Dusseldorf in February 2020. TOMRA R1 was the star of the show, with TOMRA’s booth attracting over 600 visits from 60 nationalities. TOMRA had 30 press visits and more than 40 articles about its EuroShop news. Head of Product & Solution Management, Gudbrand Arnesen, also presented a talk at EuroShop on the value of a revolutionary recycling experience. “The recycling experience does matter,” he presented. “Your consumers care about the environment and they want to do good, if you give them the opportunity to do so. It all starts with increasing the rate of return. The best possible recycling experience will drive revenue and loyalty through increased footfall.”

In August 2020, Finland became the first new market to introduce TOMRA R1 since the original launch of the product in Norway, Sweden and the US. The solution made its Finnish debut at the supermarket K-Citymarket Tammisto in the city of Vantaa. Open 24 hours a day, seven days a week, their installation became the first TOMRA R1 to operate 24/7. The first TOMRA R1 collected 28,000 drink containers in a single day during the first week of launch, setting a new record for containers collected at a TOMRA RVM. Installations at a second and third Finnish supermarkets followed within a few weeks. The third store invited their shoppers to help break the previous record for bottles and cans returned to a TOMRA R1 in a single day - reaching 33,000 containers! Retailers found more ways to get creative with how they shared their TOMRA R1 news. “Beverage container return is significantly faster and easier with the new TOMRA R1. I believe that the TOMRA R1 will attract customers to us and make returning containers even easier,” said Kimmo Sivonen, store owner at K-Citymarket Tammisto.

One year since its initial launch, there are now over 50 TOMRA R1s live across Norway, Sweden, Finland, Estonia and US – and rolling out to more markets in future.

The team has already innovated upon the TOMRA R1 since launch, with a preview of the “Express” returns concept. Express enables recyclers to leave the TOMRA R1 and start their shopping or other activities while the machine is still processing the containers. The recycling refund will be received electronically once the processing is complete, through the myTOMRA app – part of the TOMRA portfolio of digital products, for extending the value of using and owning a reverse vending machine. With no need for recyclers to manually handle each container or wait at the machine to receive a voucher, TOMRA R1 with Express offers the first completely automated container recycling experience (the "self-driving car of container recycling"), offering an even more convenient and user-friendly experience.

“Our hope is to truly transform people’s recycling experience, and to make recycling fun and up to date. If recyclers also see they save time using TOMRA R1, it will be a good way to motivate people to recycle more,” said Katrin. “For retailers and bottle depots, we hope they will be happy to see satisfied customers, and that TOMRA R1 can bring more people to their location, to increase their revenue and impact. It is exciting to see how far TOMRA R1 has come and the impact it is making for retailers and recyclers alike.”

It is not only the user experience where TOMRA R1 seeks to make a difference. “With alarming growth worldwide in plastic pollution and greater awareness of the problem, we want to make recycling as convenient and enjoyable as possible,” said Gudbrand. “The rapid returns at TOMRA R1 make it even more motivating to recycle empty drink containers. This means more can be turned into new bottles again and again, reducing reliance on raw materials for producing new containers. Recyclers can save the planet, one bottle at a time… or, in this case, over 100 bottles at a time.”

TOMRA R1 behind the scenes: Developing a revolutionary recycling experience