Quartz is one of the most common minerals, but it doesn’t exist in high purity in nature: the challenge for mining operations serving the metallurgical stone industries is to reliably deliver quartz of consistently high chemical purity.

The quartz market has witnessed a steady growth, and this trend is expected to continue. Analysts are forecasting a compound annual growth rate of over 4.5% in the next five years, driven by the increasing demand from the electronics industry. This is mainly due to the more widespread use and increase in production of electronic devices in developing countries, including China, India, Thailand and Vietnam.

The metallurgical industry is consequently a key market for quartz: it is the best source of silicon metal and polysilicon, the semiconductor at the heart of electronics, which is also used for other products, such as photovoltaic cells. Another important market is engineered stone, for uses such as kitchen countertops or tiles. Silicon also has a vast range of uses in very different sectors, from the chemical and cosmetics industries to automotive applications, as well as in the production of quartz sand for livestock farming or golf courses, or for specialised applications such as artificial turf. 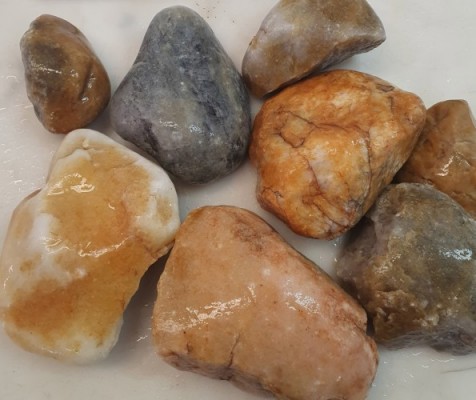 Quartz is one of the most common minerals, found in all forms of rock, but it doesn’t exist in high purity in nature: the challenge for mining operations serving the metallurgical and engineered stone industries is to reliably deliver quartz of consistently high chemical purity – and for engineered stone manufacturers, a white product with no impurities of the same color, such as feldspar, is also essential.

TOMRA’s patented multi-channel laser sorting technology unlocks the full potential of quartz deposits with its structural approach to sorting, unique in the market. The scattering effect of the multiple laser beams can be used to separate a quartz rock from a similar-looking one containing no quartz: quartz or quartz veins will appear as a glowing crystals because quartz returns the laser light in a larger area, while others will remain dark with no visible scattering. Large and pure crystals can be clearly discriminated from other rocks or minerals with a smaller crystal structure, regardless of the color or chemical composition. TOMRA’s Laser sorter also stands out for being a gravity system rather than the conventional conveyor belt, so that both sides of the material are scanned and multiple characteristics such as surface structure, size, shape, brightness and color distribution are processed simultaneously. Laboratory tests and field experience have shown that the recovery of valuable rocks can be increased by 20% while improving the quality of the product.

Jens-Michael Bergmann, Industrial Mineral Segment Manager at TOMRA Sorting Mining, explains: “The advantages for mine operations are multiple, from a longer life of the mine to lower operating costs and a reduction of waste, with consequent lower haulage costs. It also enables them to guarantee consistent high-quality of product to their customers.”

TOMRA’s Laser sorting technology also has environmental benefits, due to the reduced waste and low water use, as only a small quantity is required for wet washing the rocks at the beginning of the process to avoid dust in the processing plant. It eliminates the need for hand picking, which is required with color sorting in order to achieve the high purity levels demanded by the metallurgy and engineered stone industries. This has a positive impact on the mining operation’s Health and Safety, as it means there is no exposure to silicon dust in the sorting process.

Spanish company Erimsa is part of Elkem AS, one of the world’s leading suppliers of silicon-based advanced materials. The company has over 30 years’ experience in quartz extraction using an environmentally friendly method that enables it to generate wealth sustainably in the communities where it operates. It specializes in the production of aggregates for the construction industry and metallurgical quartz, which means that a consistently high chemical purity of the quartz is paramount. Originally, it achieved this level of quality through manual sorting. Carlos Forján, Quality Manager at Erimsa explains: “Traditionally, the material was sorted manually by many operators. It was very boring and exhausting work, which resulted in low efficiency and many errors, making it difficult to predict the quality of the output with reliability.”

In 2000, the company introduced Color sorting technology. However, in order to achieve the high level of purity they required, the sorters were calibrated in a way that resulted in high rejection rates of material containing quartz. This meant that hand picking was still required in order to improve the recovery and ensure the stability in the quality of the quartz that is key for Erimsa.

Carlos Forján turned to TOMRA for its Laser technology, which he thought would enable them to sort good quality quartz regardless of the color: “The main problem we have is in the complexity of sorting automatically when the quartz and the rejectable minerals have the same color. I thought that Laser technology would be the way to address this.”

In 2016, following tests conducted at TOMRA’s Center in Wedel, Germany, a PRO Secondary LASER Dual sorting machine was installed at its processing plant in Salamanca. The quartz is extracted and washed to avoid dust in the plant, then it is screened by size. Materials over 70 mm are hand-picked by four operators; materials under 20 mm are shipped to aggregates and quartz sand customers; materials between 20 and 70 mm are fed to the TOMRA multi-channel Laser machine, which sorts out the waste material. A final quality check is conducted by 2 operators to remove the rare pieces with quartz content that may have been ejected in the waste by the sorter, as it is calibrated to maximize recovery.

Carlos Forján had high expectations for the TOMRA Multi-channel Laser sorter, and he is fully satisfied: “The TOMRA machine has enabled us to reduce costs while increasing our yield; our production has easily increased by 20% compared to when we used Color sorters combined with hand picking. Material that in the past was lost to the waste pile is now generating profit for us. The stability of the quality is an important goal, and we have achieved this with the Laser sorter. It has been such a game-changer in our operation, that we are planning the purchase of a second Laser machine to replace an existing Color sorter.”

TOMRA’s collaborative approach and out-of-the-box thinking have been very important for Carlos Forján: “The high level of knowledge of TOMRA’s technicians and their attitude towards finding solutions for any issue that arose were invaluable. I would say that the TOMRA service is world-class, because they are able to deliver solutions for the unpredictable issues that are in the nature of the mining activity.”

TOMRA Color and Laser sorters in combination to sort by color, composition and size

Companies that serve different industries need the most precise mineral sorting in order to meet their customers’ requirements specific to each sector. This is the case of Mikroman Mining Company, which uses a combination of TOMRA Laser and TOMRA Color sorters to differentiate products according to four qualities: white and light grey quartz with low iron oxide content for engineered stones; grey and yellow quartz for the glass industry; colored quartz for ferrosilicon used in the metallurgical sector; and colored gravel, also for ferrosilicon, which currently goes with the waste.

These precise distinctions, resulting in higher product quality, were not possible before the acquisition of the TOMRA machines, and today the company operates 13 Color sorters and 3 Laser sorters in its various plants.