What is a bottle bill?

Around the world, demand is growing for countries to increase their recycling rates for bottles and cans as a means to fight litter, ocean plastic, and reduce recycling costs. Learn more about what bottle bills are and how they work to ensure container recycling.

Every minute, one million plastic bottles are bought around the world, and that number is only projected to increase. 86% of all plastic packaging is buried, burned or leaked into nature, polluting our communities and the world's oceans. In fact, the equivalent of one garbage truck of plastic ends up in our oceans every minute. This volume of plastic waste is so enormous that, by 2050, scientists estimate there will be more plastic in the ocean than fish (by weight).

With this vast scale of plastic bottle production and consumption, how can we reduce, and ultimately prevent, the negative impact that beverage container waste has on the planet? How can we recycle this material and others effectively, and how can we encourage people to return their used bottles and cans for recycling in the first place?

An increasingly popular, but far from new, solution is bottle bills – also referred to as container deposit systems or deposit return schemes – typically established through legislation passed by state or national governments. These programs achieve a collection rate for beverage cans and bottles almost three times that of states without such systems.1 In fact, TOMRA’s reverse vending machines (which automate the collection of containers for recycling) capture over 40 billion used beverage containers across 84,000 installations worldwide each year.

Here’s a simple guide to bottle bills and why they are so successful for collecting, and ultimately recycling, used beverage containers.

What is a bottle bill and how does it work?

Bottle bills work by adding a small deposit on top of the price of a beverage – such as those in plastic and glass bottles and aluminum cans – which is refunded to the consumer when they return the empty bottle or can for recycling. Think of it as buying the beverage, but borrowing the container!

Bottle bills have been around for several decades, but the concept has been used for refillable containers for even longer, particularly for glass collection. Today, these programs are in place in over 60 regions around the world, including 10 US states, with the additional deposit value on drink containers ranging from approximately $0.05 to $0.38.

(See the full version of this video, which also explains how bottle bills are financed and interviews policymakers around the world.) 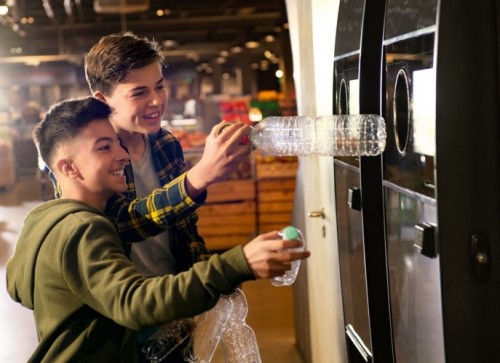 To make the wide-scale return of bottles and cans more efficient and convenient, many bottle bill programs use automated “reverse vending machines” to analyze, sort, and compact containers when they are collected for recycling and reuse. Reverse vending machines instantly count the number of containers returned, sort away non-deposit / ineligible containers, initiate billing with beverage distributors and pay out the correct deposit refund to recyclers – much faster and more reliably than is possible through manual counting.

Reverse vending machines are usually conveniently located at retail locations, allowing users to receive their refund in cash or as vouchers they can use in-store. In some countries, it is also possible to donate the deposit refund to charity directly from the reverse vending machine.

Learn more here about reverse vending machines and how they work.

Why are bottle bills successful?

How bottle bills work around the world

Many countries around the world operate these programs. Bottle bills can result in nearly 100% of all beverage containers returned for recycling; no other waste collection system comes even close to such high return rates.

Calls are increasing around the world for other countries to follow suit, with the United Nations Environment Agency in 2017 encouraging all nations to implement container deposit schemes. The Single-Use Plastics Directive adopted in 2019 by the European Union has set a target for member states to collect 90% of all plastic bottles by 2029, which experts say is difficult to achieve without a container deposit system. Regions such as Scotland, Portugal, Slovakia and more states in Australia are set to introduce bottle bills in the next few years.

With our planet facing a waste crisis, we need to live more sustainably and recycle more efficiently. TOMRA’s is committed to making this vision a reality by changing consumer behavior for the better. As these examples show, bottle bills are a proven part of the solution to changing the way the world thinks about waste. When the right waste management system is in place, people can be empowered to lead a resource revolution.

What is a bottle bill?